Orgon-Generators
Merkabas & Pyramids
The types of orgon-generators we offer are available in different sizes in the Merkaba shape as well as pyramid kits. (In case you would like to realize a special size bigger or smaller than the shown, or a different configuration or shape, please contact us so that we can ask the creator for details!)
The orgon-generators harmonize and energize the space and thus protect from any kind of harmful radiation, either from technological sources (EMF) as well as from natural sources (geopathic stress). All of you who prefer orgonites / orgon-generators in the more „classical“ sense after Wilhelm Reich from other radiation protection devices may find here their ideal ray-protection with these hand-crafted devices.
The three basic models we can offer you right now in their technical data and active fields as follows:
Merkaba asymmetrical, with pyramid, 3 quartz-pointers 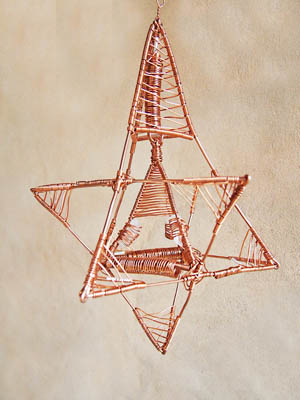 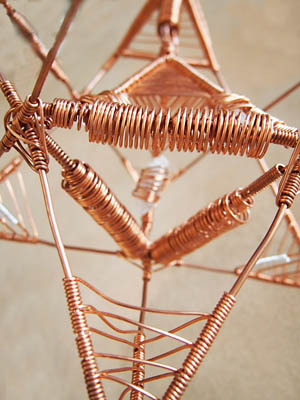 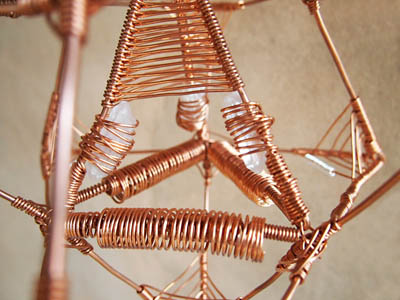 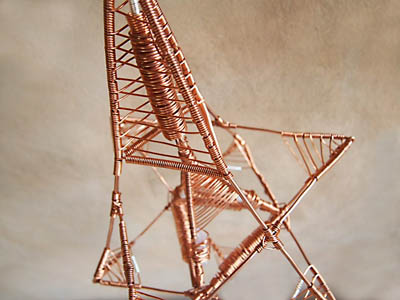 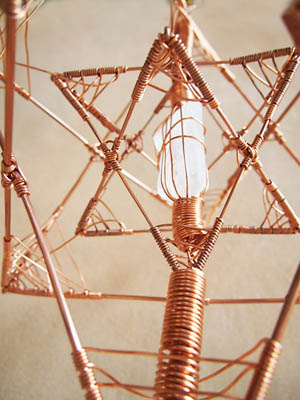 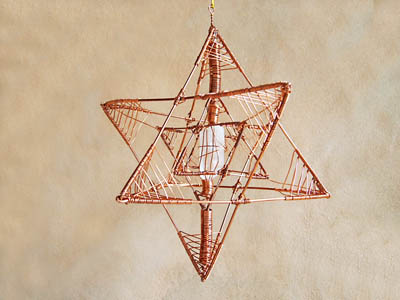 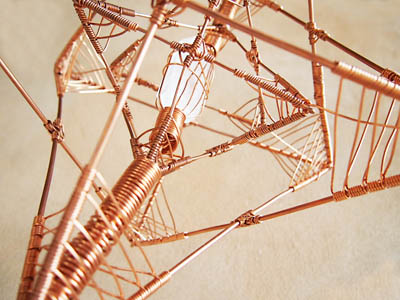 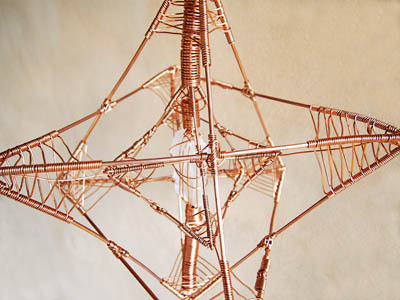 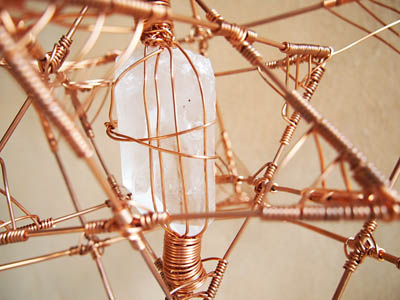 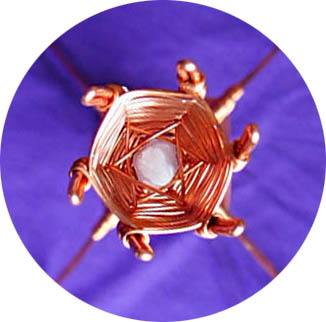 Height of the top-segment: ca. 48cm

*with slight modification of the connecting parts, also bigger diameters up to 15mm are suitable, which may result in a stronger construction as such, when it comes to bigger sizes. In these cases, it may also be aesthetically more harmonious. 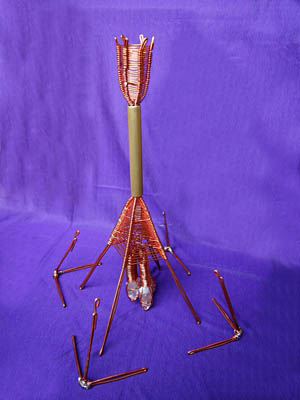 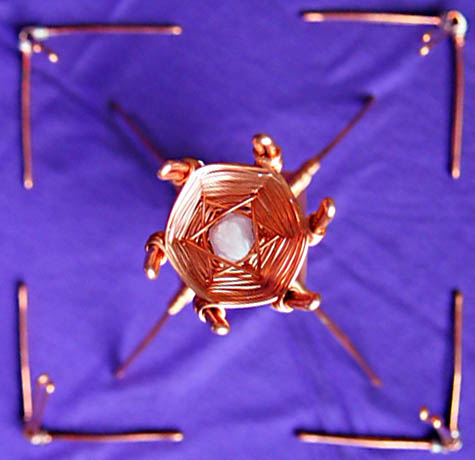 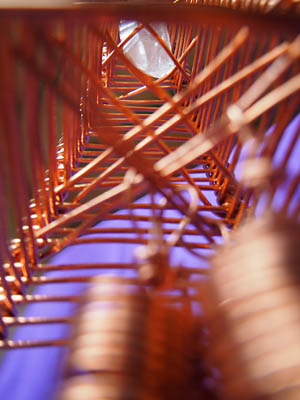 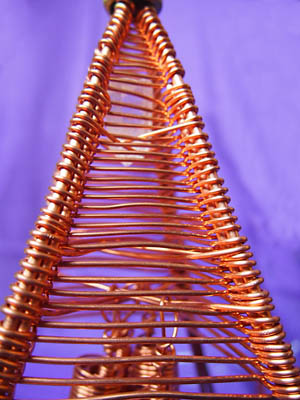 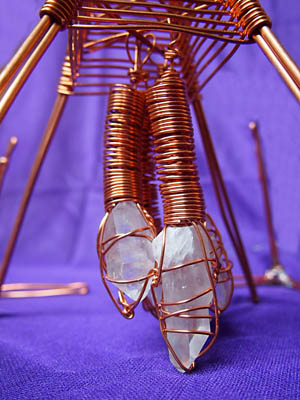 The Orgon-Pyramid as kit has been created for people who would like to energetically ‘clean, harmonize and energize‘ themselves in a more direct and intensive way. They create a very strong field inside the pyramid, which may vary, depending from the chosen size of the pipes being used: The bigger the over-all size, the stronger the field.

- The pyramid top-segment which consists of four (4) connection points, for the diagonal pipes and a set of copper-wire-connected quartz crystal pointers below and above the top.

The over-all size of the pyramid, as well as the angles can be decided according to your preferences, always, of course, in a reasonable scale. You may purchase the needed copper-tubes in the diameter and size you prefer. It is advisable to choose the size big enough, to make sitting on a pillow or even on a chair under the central point also for bigger humans possible… Frequency-healing-session with HOL Orgon Pyramid - Photo: © Pascale Berger - frequenzheilung.ch
Pyramids have been acknowledged over the past years in scientifical tests as real harmonisation, energizing and even ‘healing‘ devices even though in western ‘science‘ they are still being neglected and covered! Eastern cultures and especially Russia have made vast progress in scientifically proving the benefits not only on living beings, but furthermore, even on, as it is usually called, ‘dead matter’ such as allopathic pills which have been much more effective, even with smaller dosage and less or none side-effects after being exposed to pyramid energies! Please take your time to investigate this matter further, because it really IS stunning, what has been deliberately hidden from humanity for such a long time! (Please excuse us for not posting links for practical reasons here!) HOL Orgon-Generators in the Frequency-Healing-Practice Berger, Suisse - Photo: © Pascale Berger - frequenzheilung.ch
Who builds the HOL Orgon-Generators:
All HOL Orgon Generators are built by our friend Carlo from Luxemburg, who puts all his experience, care and love into each and every single piece of his handcrafted creations. Every HOL Orgon Generator is a unique piece and also includes the positive vibes of their creator as well. So, choosing one of our HOL Orgon Generators will not only support your lives in terms of ray-protection and living in a harmonious and energizing space, but also the life of a fellow human for who this financial contribution means a plus in terms of being able to live a life in dignity!
Despite the fact, that all HOL Orgon Generators are being tested and cleaned by us from all unwanted energies, anyone choosing crystals or devices which contain crystals should first “make them their own“, meaning clean and program them for their personal application. This is a very easy and quick procedure, usually known to people using crystals. If you have any doubts or questions, please feel free to contact us in this regard via email.
A few words on the orgon subject:
Orgon-energy is cosmic life force, a fundamental creational force. It has been proven by the German scientist Wilhelm Reich. (Wilhelm Reich himself has never been acknowledged by the global and especially the western scientific societies and as such, he has been discredited as charlatan and fraud, even though there is lots of at least indirect proof for his theories.)
Wilhelm Reich used the term ‘orgon‘ for the all-encompassing and everywhere in the cosmos existing energy, which in other terms can also be called life-force, chi, prana, pneuma or ether-force. Reich found out that the originally positive life force can be turned into negative or harmful energy by radiation and force-fields technologically created by man. This kind of waves and fields are practically to be found everywhere, at least where-ever people from our so-called civilized worlds live and dwell. Among those sources which create harmful fields belongs all kinds of technological devices based on electricity as well as all devices that use rays and or fields to work: Electric and electronic home devices of sorts, as well as radio-waves from radio, TV, mobile-phones, radar units ELF, microwaves, wifi, blutooth etc. Especially all urban areas are literally crowded by a highly toxic cocktail of radiation and fields of all sorts! But, as we cannot make all these simply disappear with a magic rod, we need to find and use other means to restructure and harmonize the chaotic and highly toxic fields, so that humans and all other living entities may not get ill or even die from them!
Of course, there are wonderful places in nature you may find healing spots, smaller or bigger ones, with different kind of healing energies available, such as benevolent energy from the earth, the atmosphere, the cosmos (as we still find them in the ancient Greek healing temples, the known "asklipeia") and also there may be, in very remote areas, still places with no harmul technological radiation at all but the basic problem is:
WHO is able to find them in the first place and how could possibly so many people use so few spots or literally "disappear" in untouched nature?
This ist the point where The HOL Rayprotection devices come into action and where the HOL Orgon Generators can offer you a solution to overcome the toxic results of humanity’s ‘progress‘ and modern lifestyle!
So, orgon IS life force, energy which supports life as such, it is a vital force and energy for the physical body as well as for the subtle bodies of which a human being is made up. This is why orgon energy also corresponds to the human perception, their feelings, emotions and thoughts, as these corespond with and depend on man's subtler bodies. 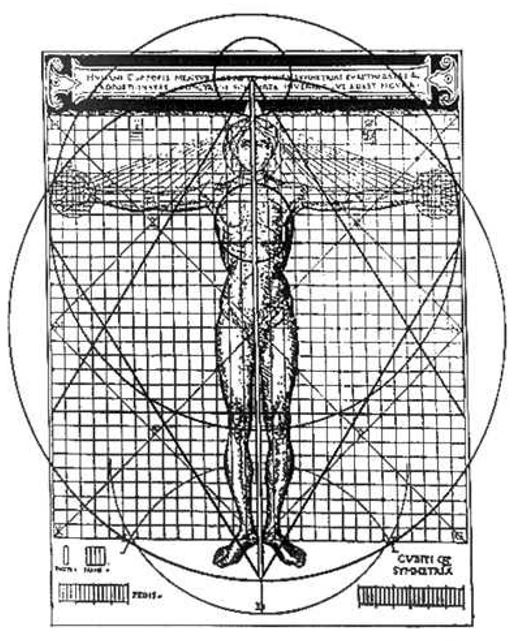 The term Merkaba is being used since ancient times, especially in spiritual circles and mystery schools. Ever since the dramatic rise of frequencies on this planet and the externalisation of the mystery schools and opening to the broader public, the term Merkaba is widely known in esoteric and new age circles. As a term it means ‘ascension carriage‘ and as such it is the term for the huma’s Lightbodies with which HU-mans can ascend to higher spheres.

The Merkaba is the divine carriage of light, which is also being used by ascended masters and higher beings, to reach and connect with humans that are in alignment with the higher worlds. The term Merkaba is built by three words:

The Merkaba is a field of light created by two intertwined four-sided pyramids (tetraeder) whereby the one shows with its top upwards and the other one downwards, building this way a star tetraeder.

In the Orgon Pyramid the quartz crystal is the accumulator in which the energy is being concentrated. It is exactly this effect which is being used here. The on-going process of magnetizing and repelling of life force creates spiral and tunnel-effects, similar to what is visible in water with waves and streams. This by nature, so to speak, activates tremendously the life force which in turn stabilizes and restructures the imbalanced field into a harmonious and balanced one! The crystal adds here to the whole process by providing its own sacred geometry patterns. Chaos is being restructured into order… In that way everything that is built into the orgon generator and is based itself on sacred geometry, add to the whole process. If you use for instance a 3D flower of life pattern, this will strongly enhance the overall effect of what an orgonite or orgon generator does: Magnetizing literally dead energy (called ‘por’), restructuring and harmonizing it inside its own material structure and sending it out again to the environment as fresh life force.

The use of an HOL Orgon Generator will thus rebalance, reactivate and harmonize the dead energy, created by the above mentioned factors and provide the place with fresh life force! Thanks to Wilhelm Reich’s insights we can today create very powerful orgon generators that may help people’s bodies vibrate on higher levels and thus support balance, harmony and, as a result, health on all levels.

Without question, there may and will usually be several sources for dis-ease, but there is also no doubt about harmful radiation being one of the most toxic sources that may tremendously harm humans on all levels, especially on a long run! This IS why it is so important to chose a well working device to prevent this toxic influence from harming our bodies and live instead in a harmonizing and energizing life supporting environment where all life can thrive! TheHOL Orgon-Generators (Merkabas as well as Pyramids) can as such help us, to live in a life supporting environment with positive impact and benefit for us as well as for our pets, animals in general and plants…

Rayprotection, Harmonizing & Energizing after Wilhelm Reich with the

All statements made on the technical aspects and way of impacting harmful radiation, in a legal sense, are being declared as ASSUMPTIONS, as they are not (yet) fully scientifically provable according to western science. They are based, though, on esoteric knowledge beyond science as well as on the findings of Wilhelm Reich, which all the more is eventually being proved true by western science as well!
All statements made on health issues, symptoms, well being etc. shall for the same reason be declared as ASSUMPTIONS as well, although we have uncountable proof of very positive effects in practice, by people with severe symptoms and/or illnesses, as well as from highly positive impact on animals (pets and farm-animals) suffering from harmful radiation.
The HOL Orgon Generators do not replace the opinion and advice of your medical doctor and/or health professional, nor are they meant as healing devices per se.
Sign in to enter tags
None
Home        Contact        Store Policies & Terms of Use       House of Light - Main Site        House οf Light - Seminars & Workshops        Donations